Watching Sonic Highways on YouTube. They have full episodes on there.

I was lucky enough to see Foo Fighters a few times. The band had two front men. They were brothers. Comrades. Soul mates. I can’t imagine the heartbreak Dave Grohl must be going through right now.

When you imagine Taylor Hawkins you always see him with that big childish grin. The guy loved being alive. You could tell. He didn’t take it for granted.

Today will be a day of nostalgia, rocking out, and fondly remembering a band that shaped my teens and the man I became.

When I watched Sonic Highways back when it first aired I really loved the New Orleans episode and knew I had to go there and see the Preservation Hall Jazz Band in person. The following year I was in New Orleans, on New Year’s eve, stood in that cramped room listening to the best live Jazz in the world. It was great. The Foo Fighters gave me that.

Tom Waits was a man with a voice like burnt gravel and the mannerisms of Heath Ledger’s Joker. He sounded like Louis Armstrong when he sang. You don’t expect that voice to come out of him when you first glimpse this thin, junky like, haggard man on the album cover of Small Change. That voice comes out like a parody of Armstrong. So strange to hear it from this thin white tramp, stinking of booze and cigarettes.

In interviews his wit was so quick you wondered if it was planned ahead of time. The man was just sharp. One interviewer said to him, after Tom pulled a bottle of wine from nowhere and started drinking, “It’s kinda strange to have a guy sitting here with a bottle in front of him.” And without pause Tom said, “I’d rather have a bottle in front of me than a frontal lobotomy.” This man was quick. That same wit, that odd poetic sense of humour, finds its way into his lyrics.

Small Change came out in 1976. You can put that record on and immediately find yourself transported to a world that maybe never even existed outside of fiction. A world of Beat Poets. Smokey bars. Dimly lit stages. You’re at a small table near the front of the stage. You can see your own distorted reflection in the side of the grand piano. Hunched over the keys, with smoke drifting up from his cigarette, is Tom Waits. His slow ragged voice singing, “The piano has been drinking…”

Normally artists easily find themselves categorised away in your mind with similar artists. But Tom Waits doesn’t fall in with Bob Dylan, or Leonard Cohen, as you might expect. He’s on the pile with Charles Bukowski, Jack Kerouac, and William S. Burroughs. All writers. And his influences are as deeply bound with comedians like Lenny Bruce and Lord Buckley as they are with the jazz that feeds his music. Tom Waits was a wit-inflicted Beat Poet with a piano.

Small Change was his fourth album. The opening track, Tom Traubert’s Blues, is a twisted version of Waltzing Matilda. Although Written in London while on tour there the song is about an earlier time. The songs subtitle, Three Sheets to the Wind in Copenhagen, sums up the nature of the narrative.

But track two, Step Right Up, is where the album kicks off. Tom takes old clichéd advertising slogans and stitches them together in this humorous musical rant. “Step right up. You got it buddy: the large print giveth, and the small print taketh away.”

Every track has something worth hearing, a great lyric or grim scene (like, “Crawling on her belly, and shaking like jelly, and I’m getting harder than Chinese algebra.” From the dirty but brilliant song, Pasties and a G-String), but the stand-out track is My Piano Has Been Drinking (not me). A nonsense song about a singer in a bar. A drunkard passing blame to his instrument and voicing distain at everything around him. The piano is played with disregard. It’s like an act. Tom Wait’s playing the drunk. While drunk. As for the words, there will be no lyrical spoilers here, it’s worth waiting for.

I won’t go into the rest of the album, some things are worth discovering for yourself. 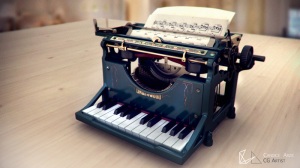 A little while ago I started writing music articles for a website called Gigape.com. Unfortunately 3 years of interviews, articles, and photos were lost by the server that hosted the website and Instead of starting fresh the guy that ran it decided to call it a day. This was a shame as I quite enjoyed writing for them and was frequently on the top spot of the most read list. He did go on to start a new website called www.LiveAndDieInMusic.com and I urge you to visit.

It seemed a shame to leave those articles doing nothing on my hard drive so I thought I’d drag some of them up from their resting place and give them new life via a new blog, linked to this one.

The new blog is called AndyChapMusic. I’ll use it to upload some of the old articles but it will also give me an outlet to write about music when the urge takes me. You’ll see at the top of this page there is now a new heading – Before Words There is Music. Anytime I write a new music post I will list it in there so check in now and then if you like hearing about new music. So far I have uploaded three articles (listed below) but I will be adding more daily.

The articles so far –